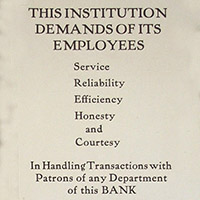 Listen to and explore the curated OHMS index for Charles Ealy's interview, created by Drew Blumenthal in Spring 2016.

Charles Ealy Born in Mariana, Florida, Charles Ealy (1895-1990) lived and worked in Jacksonville before moving to Philadelphia to take a position with Citizens and Southern Bank. In his 1985 interview, Ealy talks about the African American banking industry and businesses in Philadelphia, his relationship with Major R.R. Wright Sr. (1855-1947) the bank's founder and president, the fall of Brown & Stevens Bank, the impact of the Great Depression on the banking industry, and the relationships he had with his depositors.