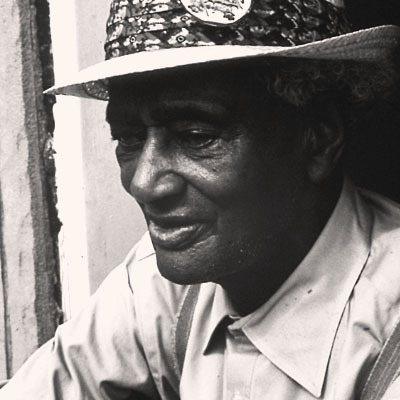 Born in 1889, Abraham Moses was just 17 when he began to work on the docks of Mobile, Alabama, in 1906. Ten years later, Moses joined the first wave of southerners to head north during the Great Migration. After arriving in Philadelphia Moses joined a labor gang building Pier 96 and 98 on the booming waterfront. After the piers were built he was let go.

“So, I go down to the wharf. Walking on Delaware Avenue. A fellow was standing there where the bus generally stopped. So he says to me, ‘Hey fellow, you want a job?’ ‘Well,’ I says, ‘I ain't got none.’ And I said, ‘I'll have to do something to meet ends.’ ‘Go over there to that Pier 48... Go in and go aboard the ship. Go down in the ship hold and help... put that flour away there.’ I went on over there.” – Abraham Moses 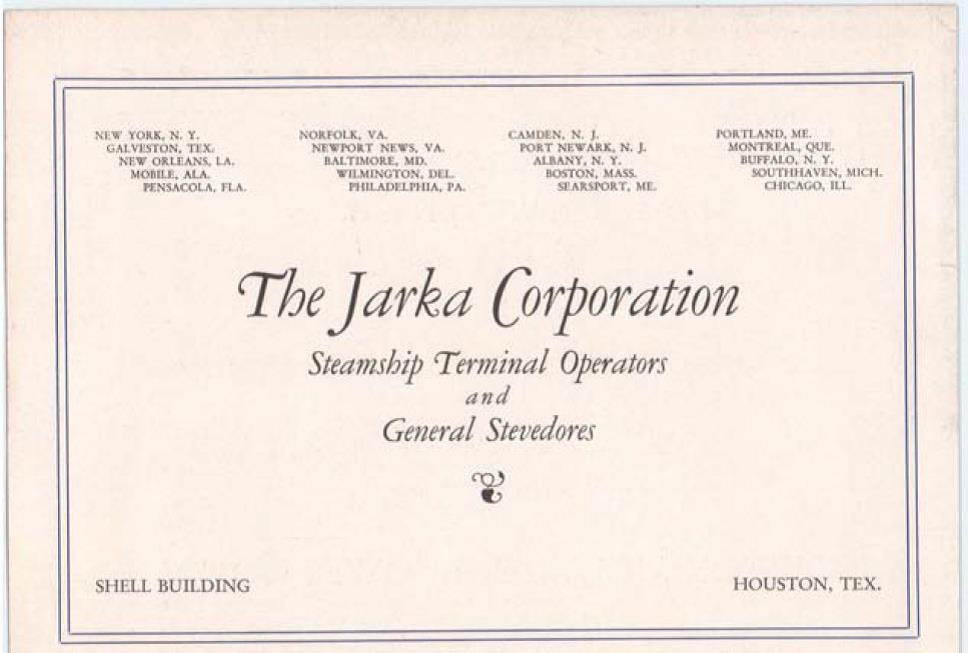 “Jarka Corporation Advertisement,” Houston Port Book, November, 1933. Moses began to work for Jarka soon after the company arrived on the Philadelphia waterfront in 1922. He worked for the company for the next thirty years.

During the First World War, Moses loaded flour and grain onto ships, then moved to the Atlantic Transport Company. In the early 1920s he took a job with Jarka, a major stevedore supplier. A few years later, two bosses, McNamara and Dugan, made him an offer.

“So, he said… ‘You ought to be able to get a gang together in about…three weeks to a month.’ ‘Oh,’ I said…So he said to me, ‘How long do you think that it would take you to get a good gang together?’ I said, ‘About 10 minutes.’… ‘You mean to tell me you, you could go out there, you could hire a gang of men, and it’d be sufficiently to get producement, and stow the cargo correct, and all of that.’ I said, ‘Why certainly.’ I said, ‘You know why?’ I say, ‘I know everybody from Pier 1 to 179 East Port Richmond.’ I said, ‘Now you send me out there to work… I'd be a dumb man… to go out there and hire men that wasn't going to do your work.’ Said, ‘That'd be a lost cat right there.’” – Abraham Moses, 1980 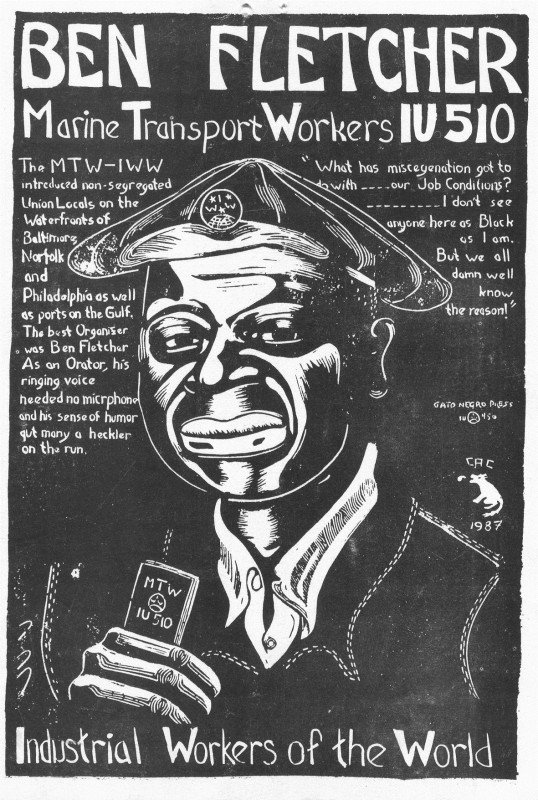 Carlos Cortez, Poster of Ben Fletcher. Born in Philadelphia, Ben Fletcher led IWW Local 8 from 1913 until his arrest in 1917 for violation of the Espionage Act and "conspiracy against the war." Fletcher then served three years in prison before his sentence was commuted, with other Wobblies, in 1922.

While working on the docks, Moses joined Local 8 of the International Workers of the World (IWW), one of Philadelphia’s most powerful unions. The IWW was a union unique in its promotion of racial integration. After the war, Moses helped found the Philadelphia chapter of the International Longshoremen’s Association (ILA) with Polly Baker, which combatted the bad working conditions and low wages that had taken hold on Philadelphia’s docks after the end of the war.

“And then, all right, now myself and nine…men…we had the ILA together for a long while, but we couldn't say nothing about it you know, because the IWW was too strong…we used to meet 17th and South. Up over the Army store. The ILA did. So after the companies blackballed the IWW… the question come up…in the meeting, I was there. They said, “Well we can get a charter and get on the footing, but somebody got to meet the… steamship owner.’ ‘Well, who's qualified to go? Somebody will have to go.’ ‘Go down to the Atlantic Refinery and get Polly Baker.’ ‘Yes, I'll do, I’ll do it.’ Polly Baker went, and we had the boat the next morning." – Abraham Moses, 1980

In the 1920s, Moses continued to work as foreman for Jarka, hiring his own gangs and working along side them in the ships. In his 1980 interview, Moses delighted in telling stories about his life on the docks, and about his ability to outsmart his bosses. 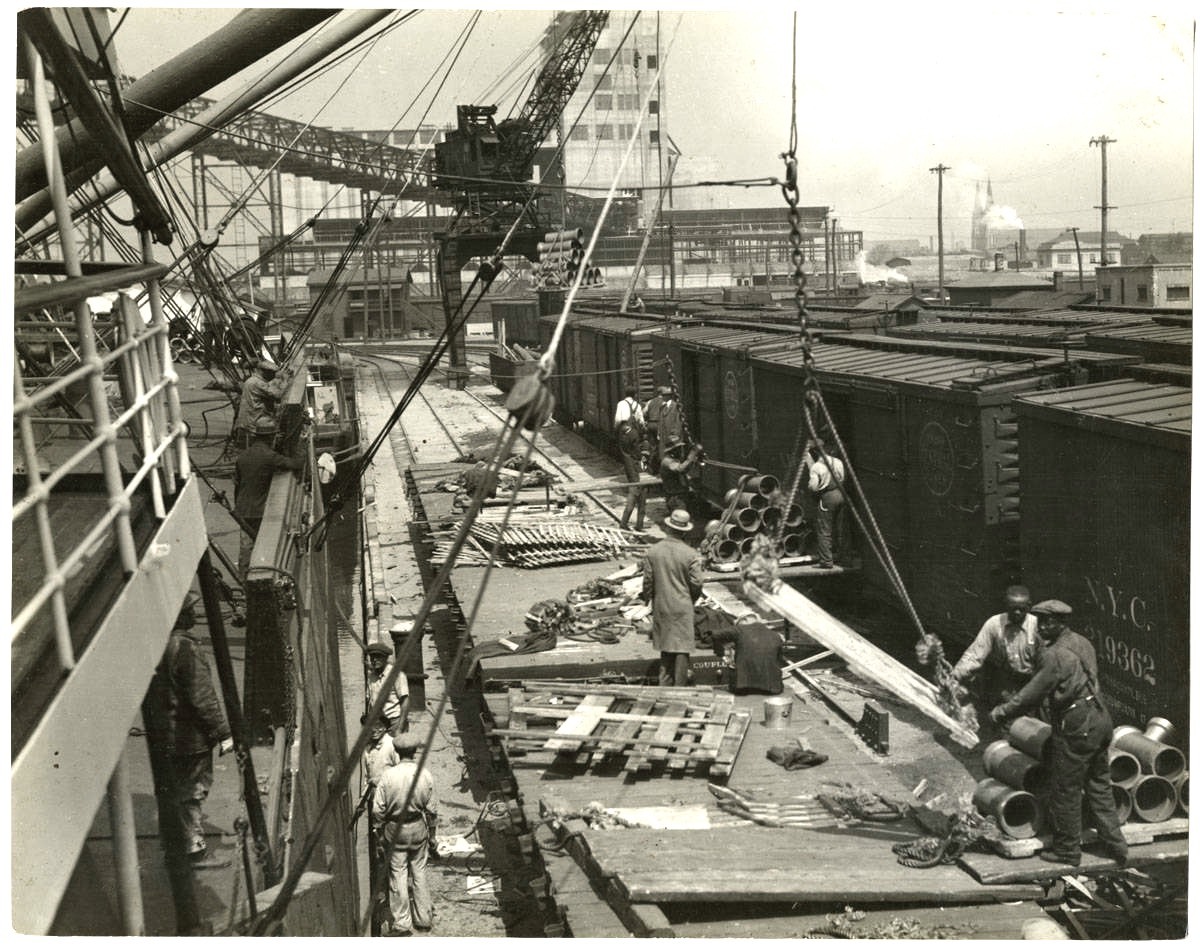 Loading ships from rail cars, the Port of Philadelphia, c. 1940.

“I said, ‘Well, if you're going to work from now until tomorrow morning, that would be a long time.’ And I said, ‘Those men will have to eat.’ He run his hand in his pocket, and he gave me fifty dollars. Said ‘Here,’ said ‘Take this, and you can buy all of them food when they knock off at mealtime.’ … So I walked into the restaurant, and everybody was eating but two men. They didn’t have nothing, so I said, ‘All right, you call for something or other, and, and I’ll pay for it.’ I’ve got fifty dollars of the company's money, you know. And I bought those two men supper at midnight, eat, and we knock off the next morning. And I think I spent about not over eight dollars of that fifty dollars… I don’t tell them I’ve got fifty dollars, or nothing like that. I don’t be that dumb.” – Abraham Moses, 1980

In his 1980 interview, Moses also reflected fondly on the decades he worked on the Philadelphia waterfront, and took great pride in the fact that people still remembered him.

“He [former longshoreman Harry Bullock] was awful glad to see me. Uh, he said, ‘Moses,’ he said, ‘You, see, I worked with you a lot and you was, you was ever so good.’ Said, ‘You was always a decent man.’ And he says, ‘They, them that know about you still talk about you.’ And I’ve been away from there twenty-four years.” – Abraham Moses, 1980