"African-American Schoolhouse," c. 1900, Library of Congress. At the age of thirteen, Fannie Hutchinson began to teach in a Virginia schoolhouse. Required to work on their parents and local Whites' farms, most Black children in the rural South received little formal education.

Born in Virginia in 1905, Fannie Hutchinson was one of sixteen children. The daughter of sharecroppers, she began to work as a live-in babysitter at the age of thirteen to help her family.

“I used to cry a lot to go back home to be with the family, but I knew this was to help, so then I stayed there and did that work so that I could give my mother a little [money] because she wasn't making much anyway...I was making about three dollars a week.” – Fannie Hutchinson, 1984

After completing the eighth grade, Hutchinson wanted to go to Petersburg, Virginia, to finish high school. Forced to work because of her father's illness, she instead taught in a country school from January through May.

“I taught first, second, and third grade...I knew all of the alphabet, all the numbers from one to one hundred...I had maybe five or six [students]...I didn't have a lot because the whole school...we're just one of those one big room schools...altogether maybe seventy-five, one hundred [students], but I had...all the lower ones.” – Fannie Hutchinson, 1984

Like many other young African American women in the South, Hutchinson also worked as a live-in domestic, and in low-paying factory and service jobs.

“The reason I left the live-in job...they moved from Petersburg to Richmond...so then after that I worked at the tobacco factory. Brown and Williams Tobacco Factory...then I went to work at the candy factory. And then after that I work at this hotel, at the Swanks Hotel. I was a waitress there until my uncle wanted me to come here.” – Fannie Hutchinson, 1984 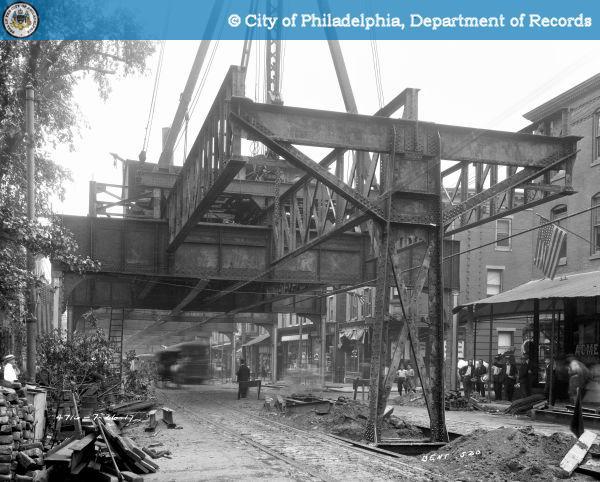 Alonzo D. Biggard, "First Single Column of the Frankford Elevated Line at Bent #520," July 26, 1917. In Philadelphia, Hutchinson's uncle worked as a designer of elevated line posts like the ones seen in this photo.

In 1926, at the age of twenty-one, Hutchinson travelled north to Philadelphia to "be a sister" to one of her cousins. There she lived with the family of her uncle, an engineer for the Philadelphia Rapid Transit Company, today's Southeastern Pennsylvania Transit Authority (SEPTA). Worried that Fannie might "go wild" living in Philadelphia, her mother had not wanted her to go north, and told stories about the dangers lying in wait for young men and women. Once in Philadelphia, Hutchinson wanted to continue her education. Fearful of what might happen to her, however, her uncle kept her from going to night school or from working too far from home.

“Oh, well, they all tell you...you have to be careful because...witch doctors take the girls away...to kill the girls and take them to hospital and experiment on them...That's why my uncle was afraid, because I'd known two or three girls that went away, right in Philadelphia...nobody found them.” – Fannie Hutchinson, 1984

Despite her family's concerns for her safety, Hutchinson was determined to make her own life in the city, and against her uncle's wishes, found a job on her own.

“When I got here...I got a job at this here shirt factory pressing shirts, and I came home that afternoon, my uncle says, 'Where you been?’ I said, ‘I went downtown and got a job.' He said, ‘Where?’ I said, ‘7 North 7th Street,’ and so he said, ‘Well, you don't have a job, because you won't be able to go back’... He said that he made enough money that he could take care of us. But I wanted to work to take care of myself.” – Fannie Hutchinson, 1984 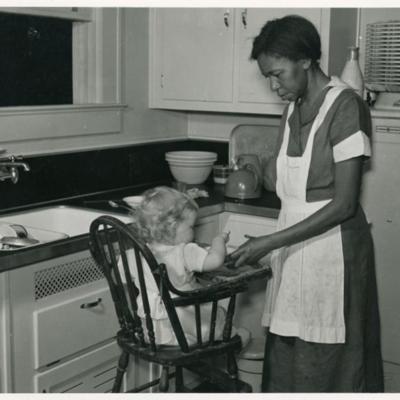 Marion Post Wolcott, "Negro domestic servant, Atlanta, Georgia," May 1939. In the 1920s and 1930s Hutchinson, like thousands of other African American women in Philadelphia, made her living by taking care of white children.

Hutchinson soon moved out of her uncle's home. Living on her own, she supported herself by doing housework for two separate families. Like Hutchinson, many black women migrating to the North became domestic workers. In the North, these women, often found themselves pressured to work long hours.

“Only reason I would work on a Sunday is the people that had children, and they went away, and I would stay with the children...I use to bring five of them into my church...they had never been on a trolley car, and I let them ride Number 10...and buy them hot dogs and take them to my apartment...” – Fannie Hutchinson, 1984

While living on her own, Hutchinson, like many other souther newcomers, learned that life in Philadelphia did not always live up to the hopes that had motivated them to move north.

The high cost of housing for Blacks in Philadelphia became an obstacle for those looking for a decent place to live. Realtors and landlords made African Americans pay more than their white counterparts, but like many other southern newcomers, Hutchinson was determined to own her own home.

“When my brother died, he had never been married...his estate went to us, and so everyone was saying, 'What you going to do with this [money]?' I said, 'I know what I'm going to do, because I'm going to buy me a home.' So I bought a home.” – Fannie Hutchinson, 1984

"4629 to 4635 Haverford Avenue," Philadelphia, PA. In June, 1949, a City photographer took this picture of Hutchinson's retail grocery and luncheonette at 4629 Haverford Avenue.

Saving what little she could, Hutchinson also, with the help of a loan company, was able to open her own business.

Looking back when interviewed in 1984, Hutchinson felt good about her move to Philadelphia. She had lived through two difficult marriages and never had children of her own, but she had learned to take care of herself and was an active member of the Mount Olivet Baptist Church in West Philadelphia. Fannie Hutchinson passed away in 1990 at the age of eighty-five.