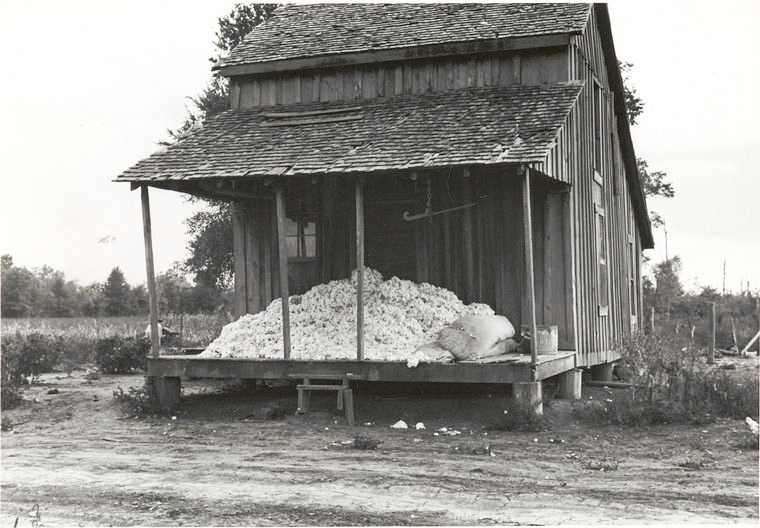 Born in Greenwood, South Carolina, in 1910, Marie Mathis grew up with her six siblings on a farm where her parents worked as sharecroppers. The Mathis family grew cotton, and after every harvest, surrendered their crops to the White landowners:

“Each family, they had different farm—different people that they worked for.  [W]e'd have to go out in the field and pick cotton.  And they'd take it to the gin and gin it up and make bales out it.  And they would leave it there... [T]hey couldn't bring anything home.  They'd leave it up there.  And them White people'd take it and sell the cotton and stuff—and wouldn't give them nothing but what they could eat!” – Marie Mathis, 1984

Like many southern sharecroppers, the Mathis family made little money from their harvests. Most Black farmers in the South had no choice but to accept that White landowners would continue to exploit them. Mathis’s grandmother often warned of the dangers that White people presented—of how they killed any Black man accused of raping a White woman—but Mathis did not understand this: 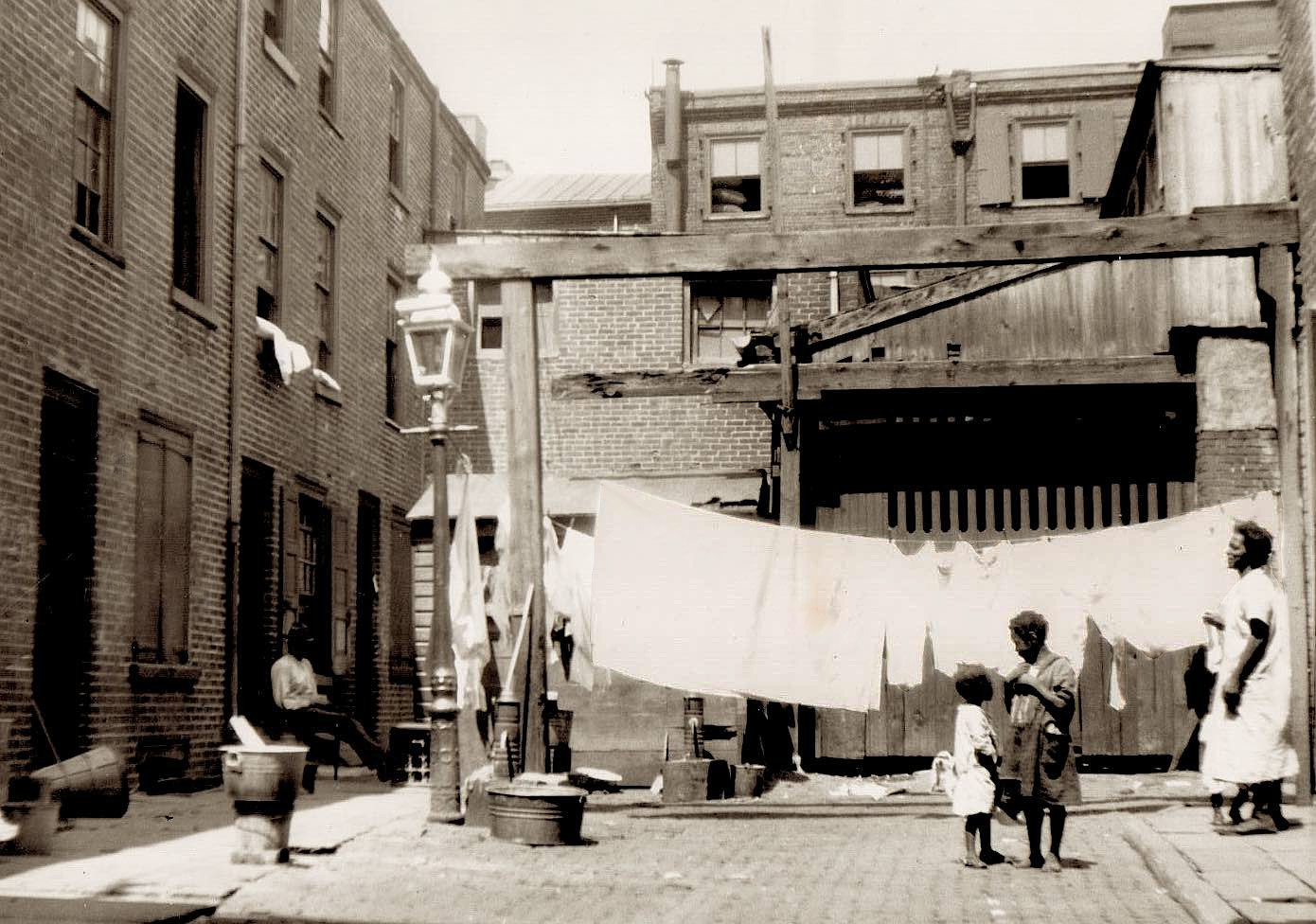 "814 N Hancock Street." In 1928 a photographer for the Delaware Valley Housing Association took this photograph of a North Philadelphia courtyard. In Black neighborhoods landowners often allowed the houses to run down so long as their tenants continued to pay rent. Families often shared these rowhouses with other boarders and moved from place to place in search of better or cheaper accommodations.

Figuring that the North “wouldn't be no worse than here,” Marie's father moved to Lebanon, Pennsylvania. There, he worked in a steel mill before sending first for Marie’s oldest brother and later for the whole family. In the early 1920s, Marie and the rest of her family joined her father and brother in Lebanon. After the men lost their jobs three years later, the family moved to North Philadelphia, soon to become the third largest center of African-American population in any northern city.

“The houses we lived in, honestly.  It wasn’t even fit for a dog to live in... And then you would get in them old houses and you couldn't pay the rent and they would be in behind you about paying rent. And... if you see something a little cheaper, you'd get that.  And it'll be worse than the one what you moved... And it's just enough to make you thank God that you had gotten as far as we have got.” – Marie Mathis, 1984 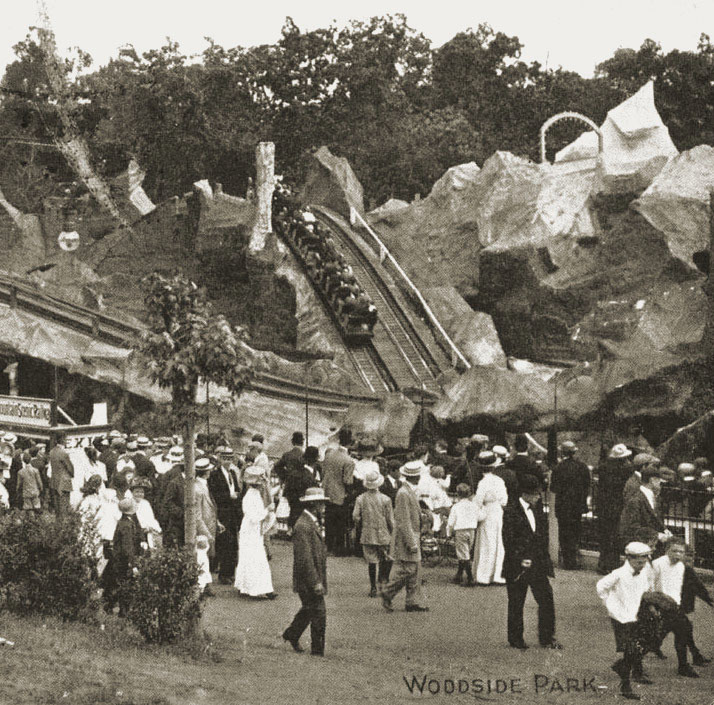 J. McLaughlan, "People on Midway with Car Coming Down Mountain," 1910. At Woodside Park, an amusement park in North Philadelphia, both White and Black patrons could ride the attractions. The park, however, barred African Americans from using the swimming pool and dancehall until shortly before it closed in the 1950s.

At about the same time that the Mathis Family moved to North Philadelphia, Sadie Tanner Mossell was conducting a major study of migrant families in Philadelphia. The Mathises moved several times to find a house decent enough to live in. The family also experienced discrimination against African Americans not much different from the South: 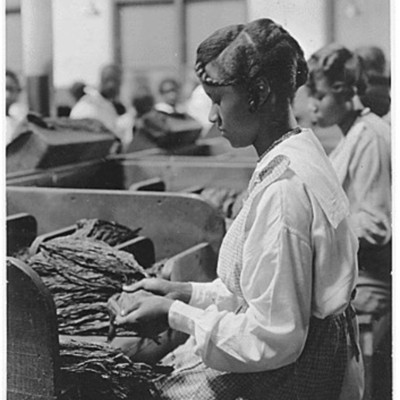 Department of Labor, "Picture of [African American] woman before work tables covered in tobacco," January 19, 1922. In Philadelphia, Mathis worked in several tobacco factories separating tobacco leaves from stems. In these factories, workers needed to strip seven or eight pans of tobacco per day. Each pan equated to one punch, or fifty cents.

In Philadelphia, Mathis attended the all-Black Gen. John F. Reynolds School until the seventh grade, then dropped out to help support her family. She soon found work in a tobacco factory as a tobacco stripper. On a tour of the tobacco factory facilities, Mathis observed firsthand the differences between working conditions for Black and White workers:

“[Y]ou should a saw how they had it for the whites.  [T]hey had big nice places for ‘em to go in and wash up.  And the place was just as clean as a whistle.  And I know they had somebody to clean it for ‘em.  But we had to clean our own.  When we got finished, we had to... stop in time to clean up our own place.” – Marie Mathis, 1984

After nine years stripping tobacco, twenty-five-year-old Marie Mathis quit because the conditions ruined her complexion. She then found work in a clothing factory as a trimmer. One of very few African-American employees, Mathis often felt overlooked: 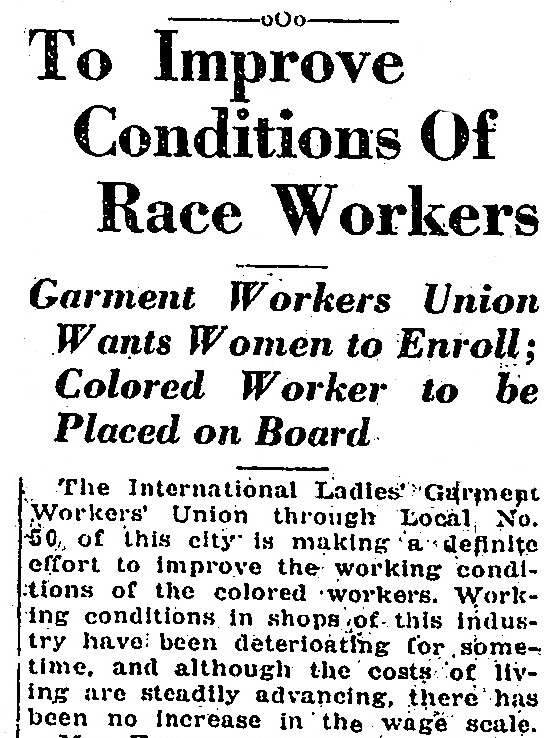 “To Improve Conditions of Race Workers,” The Philadelphia Tribune, March 13, 1926. In the 1920s, the International Ladies' Garment Workers' Union began a hard fought campaign to unionize textile factories in Philadelphia, then known as the Graveyard of Organized Labor. The ILGWU organized many strikes and protests to improve working conditions for women in the clothing industry.

“[The union man] didn't ever come around to us.  He'd go . . . in the office and they would have a meeting.  But I would never be in on the meetings.  That's why I know... it was something going on wrong.  You know.  'Cause they would come there, they'd have meetings, and they'd be squabbling around in there.  But they didn't ever tell me what was going on... I left there—I left there one night.  And I didn't go back.  Because the grievance lady in the union, she told me—she said ‘Why don't you quit?’  They had some kind of squabbling in the union... And she told me, ‘Don't tell nobody I told you that’ ... Because they was making more than me and they knowed I knowed it.  But they know there wasn't nothing I could do about it. But she thought that maybe I would say something about it.” – Marie Mathis, 1984

Despite her family's struggles in Philadelphia, Mathis harbored no regrets about her family’s move. Marie Mathis never married. She remained in Philadelphia for the rest of her life and died in 2005 at the age of ninety-four:

“Lord put this big world here.  He didn't put it here for just one somebody.  He put it here for all of us ... That's what I say.  I say he put everybody here for a purpose... [I]f he had meant for them to have everything, look like he would have just put them here . . .  But he got it mixed up.  And he meant for everybody to live off the sweat of their brow, just like, the white.  But they didn't do that.  They lived off the sweat of our brow.  And I ain't never went for that.  And that used to remind me of when I was a little kid.  It used to just make me so mad, I wouldn't know what to do... I said, ‘The wrong crowd got here first’ ... I said—‘I bet, if they was to reverse now, it wouldn't be like that.’  But maybe it would.  I don't know.” – Marie Mathis, 1984 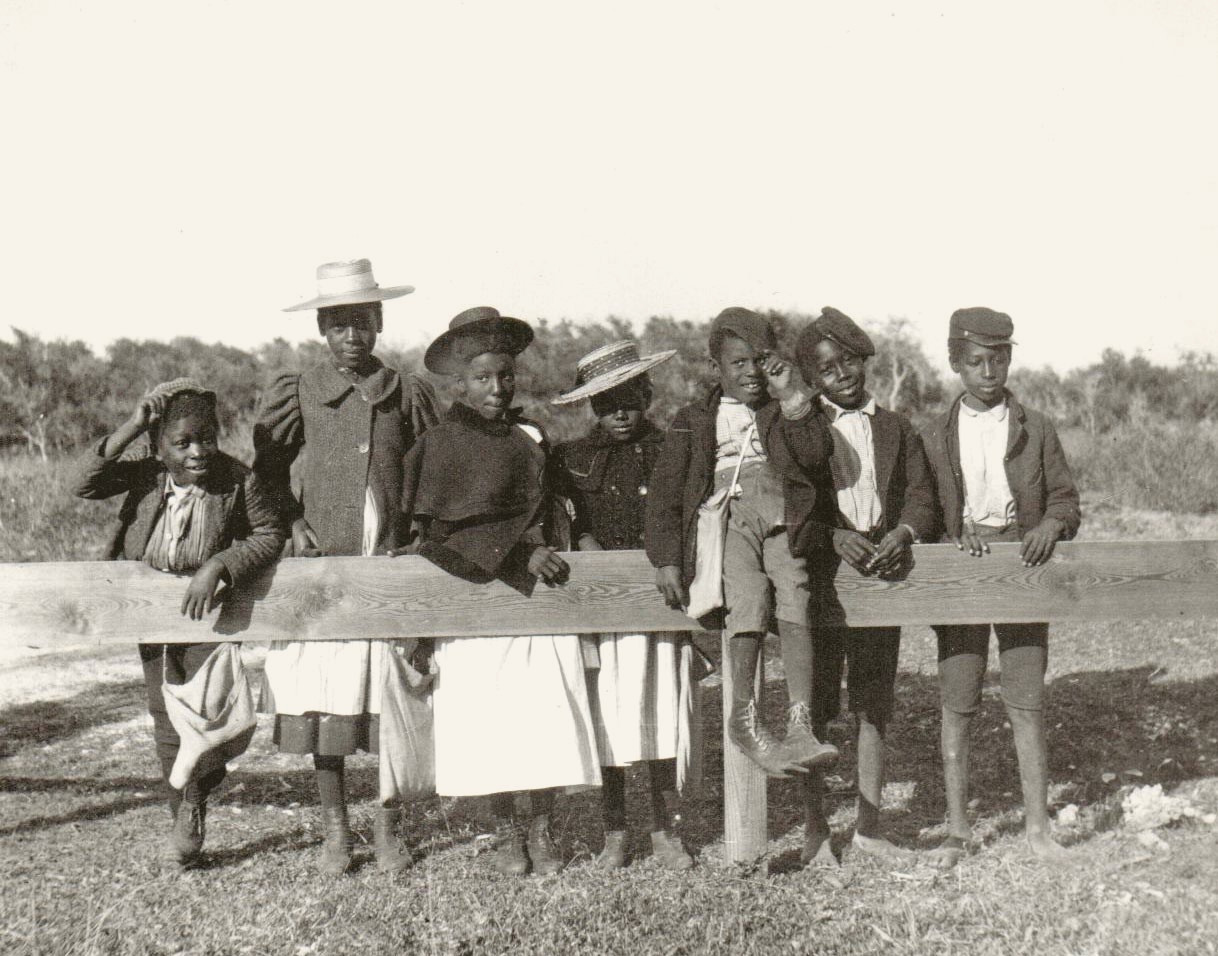