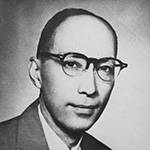 Listen to and explore the curated OHMS index for Milo Manly's interview, created by John Smith III and Robert Bennett in Fall 2014.