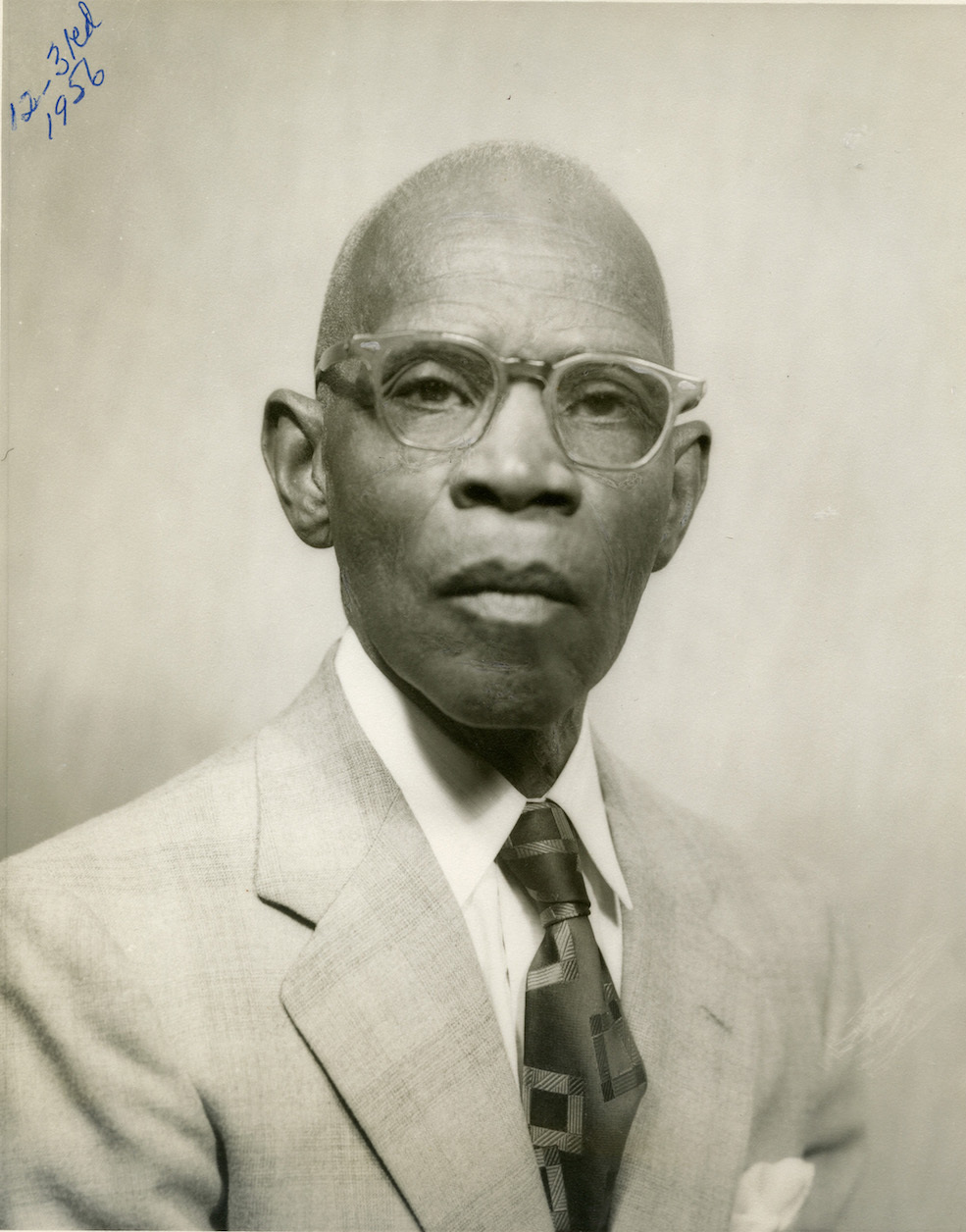 Many who came North during the Great Migration did so to escape the oppression and lack of opportunity they experienced at home. Most migrants found the better jobs and some of the opportunities they hoped for. Some, however, including Harvey L. Wilson, regretted their move to Philadelphia.

“I was a railroad man in the South. That was my job. When I come here, unh-uh, no, no, no, no, no, no, no, you couldn’t even get a job in the railroad shop here. All that was done by whites, no colored. I had to take what I could get and I didn’t make no money. I had to work for a whole lot less here than I did in the South…I stayed by just low enough to get broke, and I was ashamed to go back South, I would have went back, but if I’d have went back, I wouldn’t have had nothing, because I didn’t make nothing…I find that’s the one mistake that I made in my younger life…If I’d have stayed in the South, I think I’d have been far better off.” – Harvey L. Wilson, 1981. 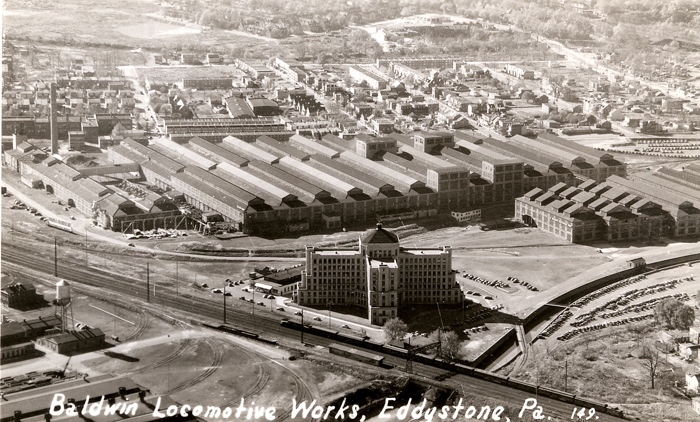 In 1917, Wilson moved from Jacksonville, Florida, to Philadelphia looking to improve himself. During his first years in the city, he worked for the Newton Coal Company, located at 27th and South Streets, and then moved to the Eddystone Munitions plant in Delaware County. Despite his broad range of skills, the massive layoffs of African American workers at the end of World War I forced Wilson to find work in a chitterling house in Philadelphia. In 1920, he moved to Baltimore, where he worked as  foreman at an American Sugar refinery.

“You see, in the South, a black man has a greater opportunity down there, or did, back in those years.  Those white folks down there wouldn't work. And, the black man had the chance to learn everything.... In the South, when I was a boy, we had colored contractors, builders, bricklayers, plasters, cement finishers. All that was done by the black man.  All of those big buildings, on those scaffolding, never see nothing but black on them.  You didn't get that up here. The white man did that up here.  That was the difference in the South and in the North.  The white man in North is always smarter, he didn't mind working. But, the white people in the South, hmm, no, no, no.  No, work wasn't a thing for them, you like that?” – Harvey L. Wilson, 1981.

The lack of opportunity in the North was not the only thing that dissapointed and confused Wilson. 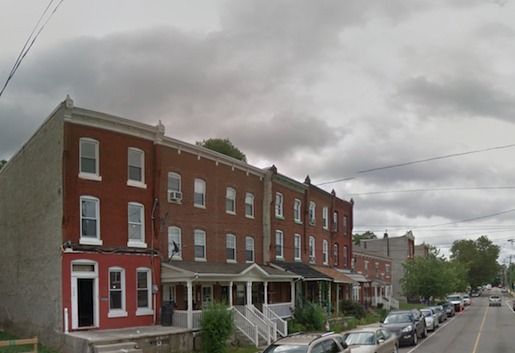 In the 1920s, Harvey and Emma Wilson moved into a rowhouse on this block of North 44th Street, in the Mantua neighborhood of West Philadelphia. Wilson recalled that when they moved there they were one of only two or three African-American families in the entire neighborhood.

“Well, I was a little surprised at the way people dress here… Especially the [men], I was not used to seeing [men] wear whole styles… I lived in Jacksonville for quite a number of years, and it used to be called Second New York. And, the people in that city really dress right up to time. And when I came here, I find it altogether different... I was surprised to see how men dress here. Couldn’t believe it… as [time] went on, and the people come in from the South, they… over a few years, they learned the Philadelphians how to dress.” – Harvey L. Wilson, 1981.

In 1921 Wilson moved from Baltimore back to Philadelphia and there met his wife, Emma, whom he married on September 30, 1923. Together, they joined other African Americans then moving from the congestion of South Philadelphia to the streetcar neighborhoods of West Philadelphia. There they found a new home at 720 North 44th Street. Wilson also found a new job as working for a wholesale grocer. 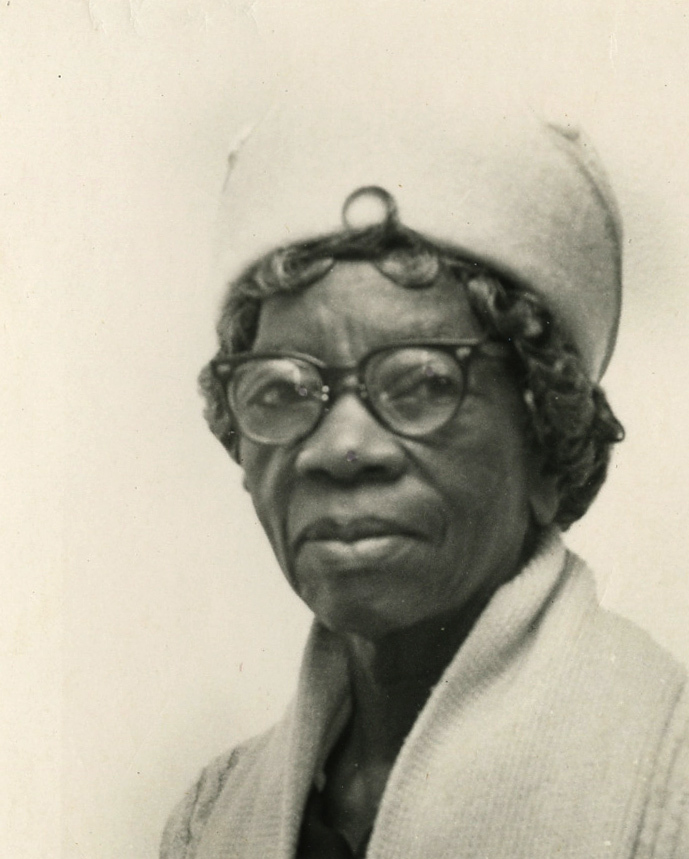 Like other southern newcomers, Wilson joined a church, Mother Bethel, soon after his arrival in the city. In his later years, Wilson became a church historian, and gave tours of the Church and its museum.

“I have been a member of Bethel Church pretty near sixty years. I have enjoyed some very, very wonderful days around Bethel, and meeting people...I have met practically every nationality in the world at Bethel.” – Harvey L. Wilson, 1981. 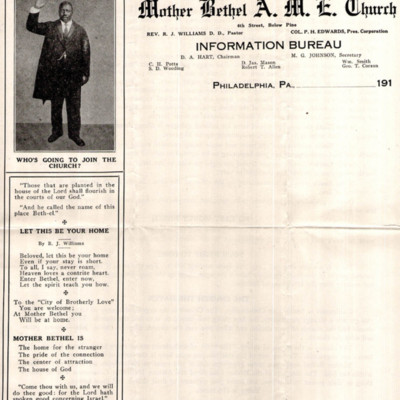 Stationary, Mother Bethel A.M.E. Church Information Bureau, c. 1918. Eager to attract new parishioners, Mother Bethel during World War I established both an information bureau and reception committee to encourage people to come north and to welcome them "within her fold."

When interviewed in 1981 Harvey and Emma Wilson had been married for almost sixty years. Wilson never did find the opportunities he hoped for in the North, but he did find a wonderful wife and loving community through Mother Bethel church.

“Very fine wife, sister-in-law; very, very good, take very good care of me. And the people down at the Bethel Church, I think they love me, and I love them.” – Harvey L. Wilson, 1981.

Harvey Wilson lived in Philadelphia's Mantua neighborhood until his death in at the age of 102, in March of 1982. His services were held at Mother Bethel Church.

“Twenty years ago, you wouldn't think this was the same neighborhood after they started putting apartment houses in here, that wreck everything. Nothing, nothing. Now Philadelphia, today it's hardly fit to live in, your life, your life don't—value chicken life today. They don't value chicken life...You walk out your door, you don't [know] whether you're coming back or not. And most, especially old persons like me.” – Harvey L. Wilson, 1981.