from a group photograph

“I’m one of the Old P’s (Philadelphians)… I live in the same ward I was born in… I’m quite provincial, incidentally.” – Joseph Marshall, 1986

Joseph A. Marshall (1901-1990) was born and raised in the Germantown neighborhood of northwest Philadelphia. Both of his parents had migrated from Maryland—his father from the western shore, and mother from the eastern shore—to Germantown in the late 1800s. There, his father, whom Marshall described as a “country boy,” worked in construction, and then as a coachman for F.H. Strawbridge. Marshall grew up in a house on four acres, on the northwest corner of School Lane in Germantown.

“Wintertime, we had… three big fields for his horses, like that, you know. And we used to sled down there… It was a lot of fun, as far as sledding was concerned. But we had bicycles, and we had all… the athletic equipment necessary. I never had to buy a skate or a baseball glove or a bike or anything like that. We had them all.… I lived there for ten years as a kid, up to the time I went in the fire department. Best ten years of my life….” – Joseph Marshall, 1986 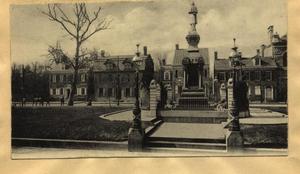 Market Square, Germantown, c. 1905. First settled by German Quakers and Mennonites in the 17th century, Germantown in the 20th century became a predominately African American neighborhood as a result of the Great Migrations from the South unleasshed by the First and Second World Wars.

After high school, Marshall studied industrial and electrical engineering at the Pratt Institute in Brooklyn, New York, to prepare for a career as an engineer. The summer before graduation, however, he experienced a rude awakening.

“I had applied for summer work, and I didn't get it because I was colored. I had three months to go before graduating, and I went to the Head of the Department, Dr. Cook, whose name I’ll never forget. And I wanted to be placed with G.E. or Western Electric, as they were grabbing those graduates… they would feed them through their various departments for four years, you know. I mean, just like… intern work-- and if you left at the end of four years, or if you stayed with him, you were just about tops, you know. I wanted that. So, Dr. Cook looked at me, he listened to my story, and, he said, ‘Well,’ he said, ‘you can go South and teach.’ He might as well have spit in my face… So I made up my mind… I says, ‘I’m gonna go home… get a job, and stay there. And I did just that—same day. I went back.” –Joseph Marshall, 1986 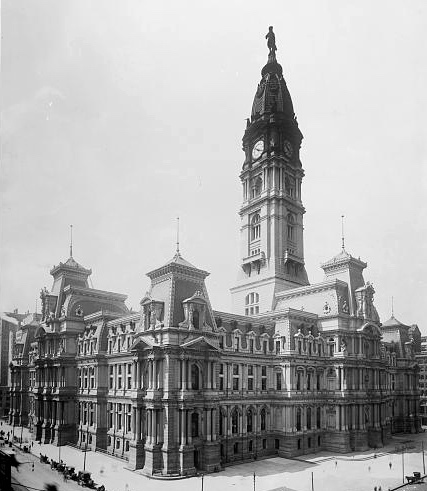 City Hall, Philadelphia, PA, c.1905. Marshall and others seeking city jobs in the early 1900s had to first gain approval from the City Republican Organization, which used its control of thousands of  jobs to maintain its power.

Returning to Philadelphia, Marshall went straight to City Hall to seek employment and there discovered openings in the fire department.

“The fire department [hand clap]. Bingo!—up to the seventh floor, I had business, and yeah, I noticed something even then in my own town. On my application, the clerk put a ‘C’, a fast ‘C’ down there… make the distinction between White and colored. I saw that. I didn't say anything. But I wanted to take the examination. So I took the examination… and I was twenty-one on the original list…” –Joseph Marshall, 1986

Marshall’s score on the civil service examination placed him high on the list. When he checked the City Hall bulletin board to see who had been appointed to the fire department, however, his name was not listed. Asking a clerk why he had been skipped he was told that he needed to be “certified.” 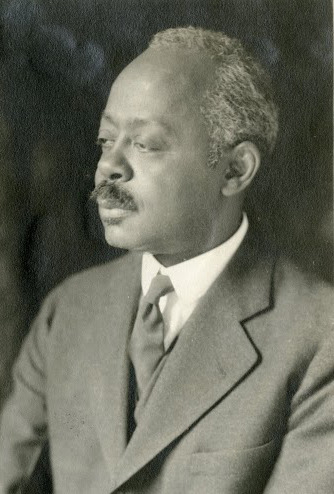 Richard Robert Wright, Jr., c. 1924. A minister, civil rights leader, and founder, along with his father, of the Citizens’ and Southern Bank in 1921, Wright was Mayor J. Hampton Moore’s most important African-American adviser when Marshall applied for the Fire Department in the early 1920s. 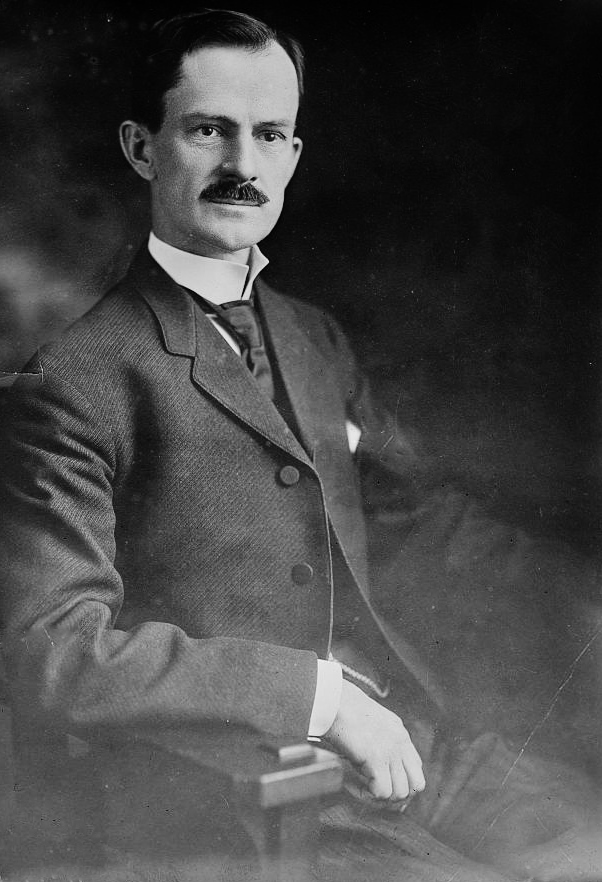 Mayor J. Hampton "Hampy" Moore, c. 1920. Mayor of Philadelphia from 1920-1923, Moore attempted to win Black voters by hiring African Americans to city jobs from which they had previously been excluded.

“So, not being a politician, I inquired… from one of the firemen that I knew down at Engine Eleven, and I explained the situation to him. He said, ‘But what are you doing tomorrow morning?’ I says, ‘nothing.’ He says, ‘well meet me down here at eight o'clock.’ I says, ‘Fine.’ So he took me over to see R. R. Wright Jr. And he explained the situation, and at that time, R. R. Wright Junior was quite a political power... And he knew Mayor J. Hampton Moore very well. So, I was a good friend of this fireman, and he knew Moore and Wright, and I didn’t—(laughs)—was just doing me a favor. And he dictated a letter to his secretary, and he sealed it… He says, ‘You take this up to the Mayor,’ which I did, immediately, same day. And three days later, I had been sworn in and was in uniform. That’s the way it worked with me, in my particular case… If it was a civil service job, why, then, of course, you had to be certified by somebody. I saw that myself in black and white. They write the word ‘certified’ alongside of your name and then you're in.” – Joseph Marshall, 1986

Thanks to R.R. Wright Jr. and Mayor J. Hampton Moore, Marshall was appointed to the African-American Engine Company No. 11 in 1923. Between 1886 and 1918, only twenty-six African Americans served in the fire department. When Philadelphia’s Black population soared during the Great Migration warring factions in the Republican Party used city jobs including firemen and policemen, to win African-American voters. Out of 900 men appointed to the fire department in 1919, Mayor Thomas Smith appointed thirteen African Americans to Engine Company 11 doubling it in size. In 1923 Marshall became the twenty-second Black fireman appointed. Racial discrimination, however, continued to block promotions.

“We even had segregation, believe it or not, back in 1923 within a firehouse. Engine Eleven was the only company where they had colored firemen. The engineer and the [Black] firemen’s bunk beds were taken out of the bunkroom and put in the sitting room, which was on the second floor, front. And the officers had a bunk in their office. That wasn’t to be desired, but the men didn’t put up any objection. We had an interesting incident that occurred some years after I was appointed. The [White] engineer of Engine One was being disciplined, and [he was] transferred to Engine Eleven as punishment. So, his bed, normally, would have been in the second floor front room. He wouldn't sleep in it. He says, ‘I’m sleeping with the men in the bunk room.’ And that's where he slept. That was the beginning of the end of that.” – Joseph Marshall, 1986 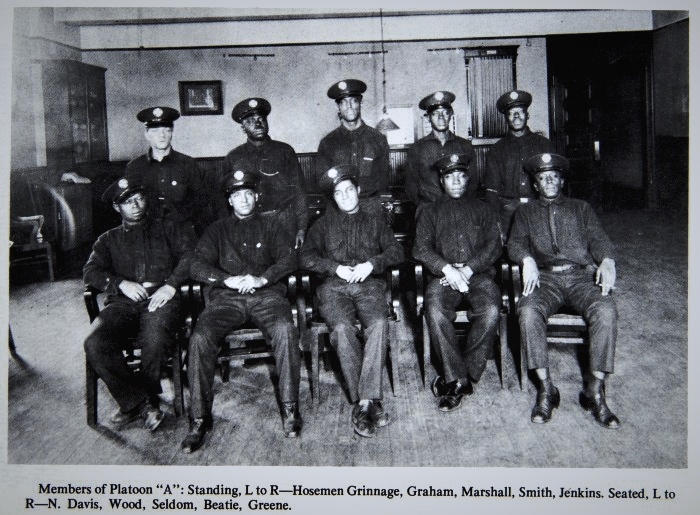 Members of Platoon A, Engine Company No. 11, c. 1930. Institution of the two-platoon system by the Philadelphia Fire Department in 1918, led to a wave of African American hirings, including Joseph Marshall, seen here standing in the middle of the back row, in 1923.

The Philadelphia Fire Department did not appoint its first African American lieutenant, Peter C. Graham, until 1931. Despite high scores, Marshall had to take the lieutenant’s examination nine times before his own promotion in 1943.

“I knew it was all politics. So, I went to my battalion chief, and I told him… ‘I'm twenty-eight on the list for lieutenant, as you know, and thirty-two vacancies.’ I says, ‘When they get down to me, I’d like to make it.’ ‘Oh, no, no, no, no, no! Can’t do that! Can’t do that! Can’t have two lieutenants in one house.’ That same time, they had two lieutenants working a truck company up in the Northeast—(laughs)—one was assigned, and one was detailed—assigned someplace else, maybe headquarters and detailed down there. But they had two lieutenants working. And I didn't like that so much, naturally. So I had no one to certify me, again. I was skipped, and I didn't make it until—when was it? 1943.” – Joseph Marshall, 1986 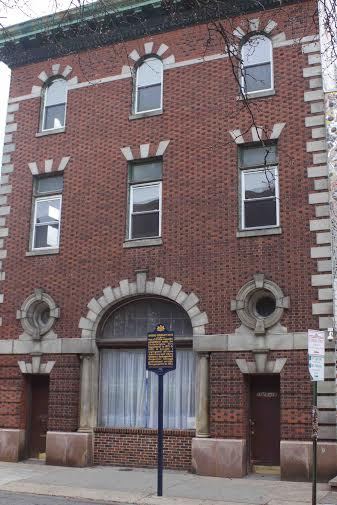 Just up the block from the Standard Theatre, Engine Company No. 11 was located amongst the nightclubs, cafes, and speakeasies in the heart of Black Philadelphia’s entertainment district. Living round the clock in the firehouse during their shifts, the firemen forged a close bond with the people in the neighborhood.

“It was eighty-four hours a week—practically lived there. We only had two platoons back in those days. And we used to have a lot of fun. And all the neighbors knew us, treated us swell, royal. I can remember times when, good weather, we would be sitting out on the bench in front of the firehouse… a neighbor would be passing by, with a basket on her arm, and say, ‘I’m going to the store. You want anything?’ And if you said yes, ‘What is it?’ She’d get it. Give it to you, no charge… The merchants in that block between Tenth and Eleventh, relied upon Engine Eleven for many things. Protection, for one thing. We used to look after their kids…” – Joseph Marshall, 1986

Engine Company No. 11 was one of the original twenty-two paid fire companies in the city of Philadelphia, and the only fire company to employ African-Americans. 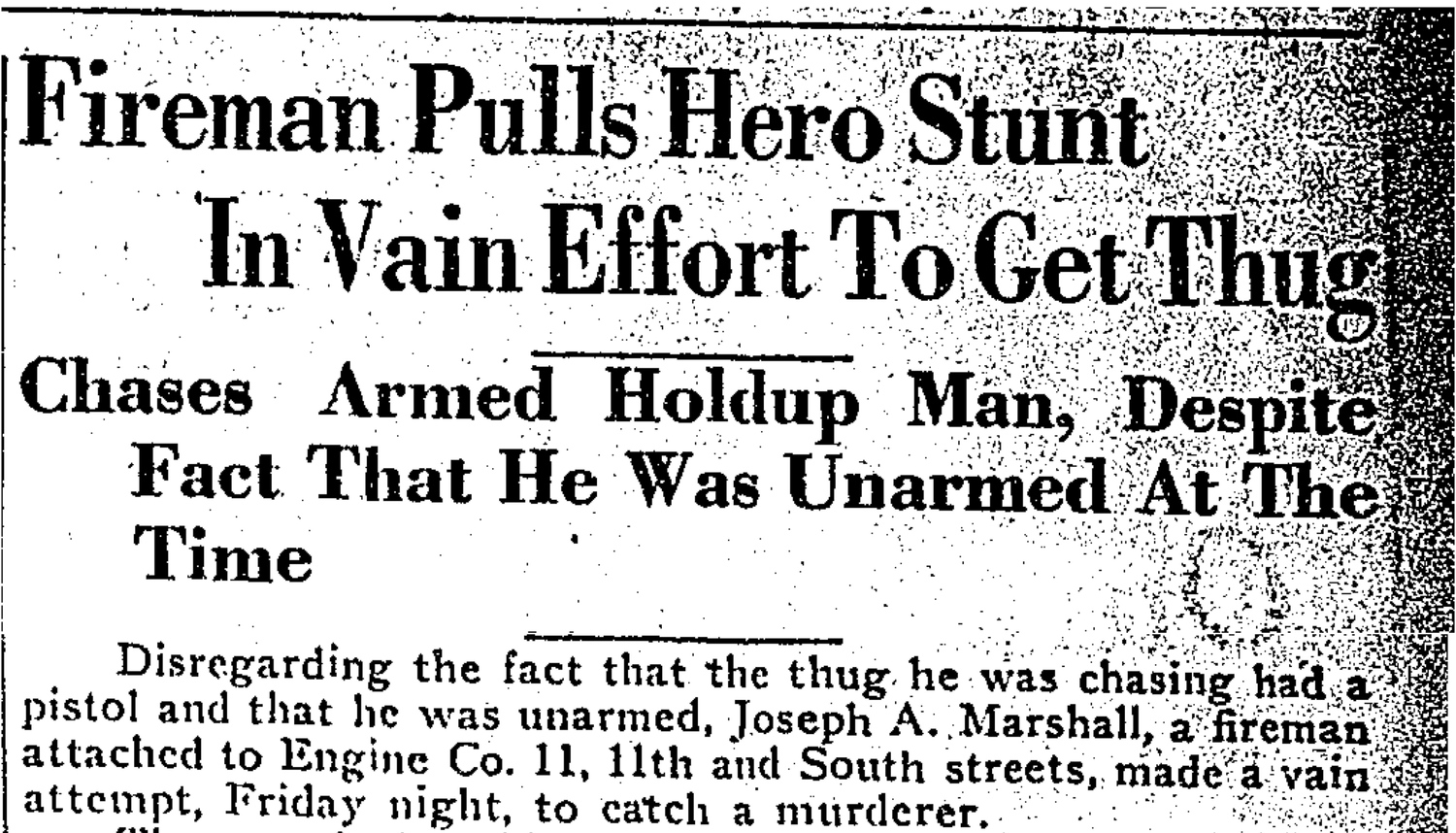 On November 4, 1937, the Philadelphia Tribune published this story about Marshall. After hearing gunshots just after his shift ended, he, although unarmed, chased a man fleeing after shooting a local shop owner. 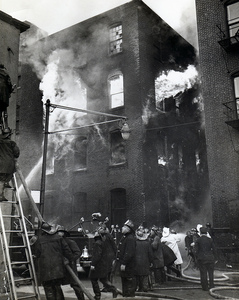 Engine Company No. 11 fighting an apartment fire in a South Philadelphia neighborhood, c. 1950.

Marshall took firefighting seriously, educating himself and learning from veterans who understood the business of fighting fires. In his 1986 interview Marshall shared some stories about the fires that he had fought, including a church fire at 4th and Wharton Streets in 1930, when his quick thinking saved the lives of fellow firemen.

“There were no vertical supports, and nothing was dripping through. So I looked around. ‘Lieutenant.’ I said, ‘This ceiling’s not gonna hold.’ He didn't answer me. Ceiling hadn’t been opened up…. I turned around to the rest of the group, and I could’ve been reported for it, but he didn’t report me. I said, ‘Everyone on Eleven’s line, back it out!’ See, because I knew that ceiling was not gonna hold. So, we backed it out... and I’m gonna tell you, whew, I wish I could describe it more vividly. Big sheets of that ceiling was cracking and falling and crashing… only two…were hurt. The rest of them got clear. But it didn't have to happen. It didn't have to happen. If you had been a student of the game, it would not have happened. My lieutenant wasn’t.” – Joseph Marshall, 1986

Highly respected for their skill, speed, and quality, the Black firemen of Engine Company No. 11 worked hand-in-hand with White firefighters in Philadelphia. In his later years, Marshall also served as steward for Local 22.

“We were treated fine. No problems, no problems. Because, you know, firefighting is a very dangerous game, and you don't play when the fire’s going out. That’s all business. We knew them. We'd speak to them, or they knew us. They'd speak to us. No difference. We used to go to picnics every year, and we'd have a ball. Local 22 would have a picnic every year for firemen. Oh, yeah, I used to attend them all.” –Joseph Marshall, 1986

Joseph Marshall was promoted to an officer's rank of lieutenant in 1943. He retired from the Philadelphia Fire Department in 1946. Marshall and his wife, Anna, had three children: Dorothy, Juanita, and Joseph Jr.. Both daughters graduated from the University of Pennsylvania. Joseph Jr. recevied his college degree from Cheyney University of Pennsylvania. 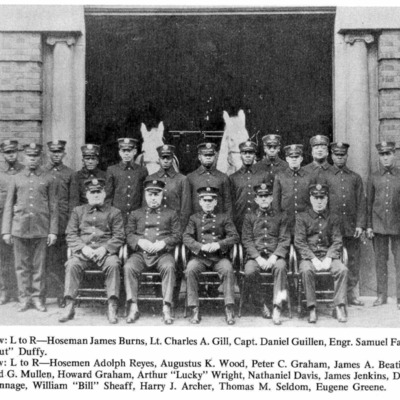 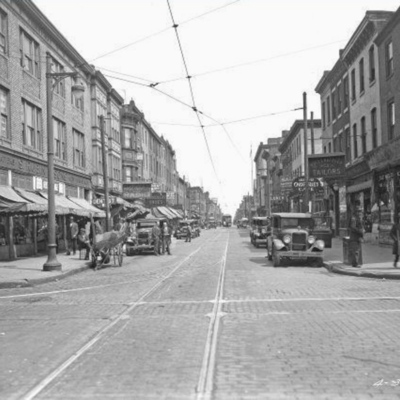 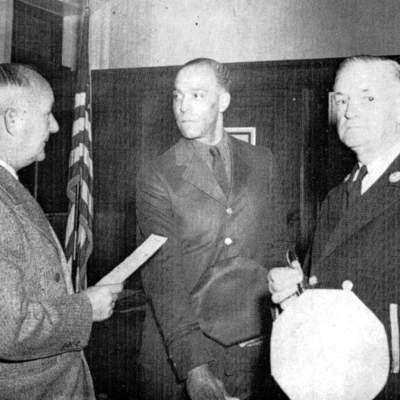 Joseph A. Marshall being sworn in as a Lieutenant in the Philadelphia Fire Deparment, c. 1943.