Frank W. N. Moore writes in response to a letter previously printed in the Evening Public Ledger on the subject of racial equality and the involvement of African Americans in World War I.

To the Editor of the Evening Ledger:
Sir--In answer to R. B. N.'s letter printed in your paper of today, allow me to say that what he states about the Indian is very true, and I feel that R. B. N. has a common education, the same as myself, and I believe he has studied history, some of which he has forgotten.
In answer to his question about the negro, let me say that he is going to this war both through enlistment and conscription, and, as in the days of old, he will do his part for this country which belittles him. Let it be understood that in the sixties the North did not whip the South until it took negroes in its array, in 1898 the United States did not win the Spanish-American war without the negro. It was on San Juan Hill that Roosevelt and the Rough Riders tried to retreat from the fire of the Spanish snipers, General Maceo and his negro troops said "charge!" The negroes are not counted much, but they won the battle of San Juan Hill. Remember, the negro is greatly discriminated against in this country, but he is no anarchist. He has not plotted to kill Presidents or other chiefs of this country, but he has wrestled with the man who killed out deceased President, William McKinley.
The negro causes no race riots, but when ignorant classes of foreigners come here and start trouble the negro gets the blame. Please note that there are no negro Congressen or other leaders in the Capitol, not because the negroes are all ignorant, but because of the prejudice of some of the uninformed classes whites. The negro has no equal rights in voting in the southern States, for he must vote the Democratic ticket or else not vote at all.
So let every one who calls himself a man remember that God created all mankind, regardless of race, nation or creed, and that it is our duty to try to help the weaker ones, for there are good and bad in all races. I myself will try to teach my fellmen right from wrong, and if you do likewise we in time will be proud of our own work. But remember that the negro is no coward.
FRANK W. M. MOORE.
Philadelphia, August 13, 1917. 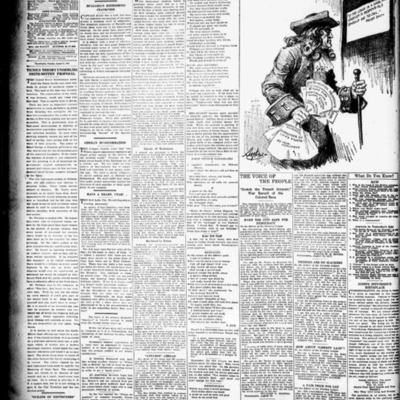 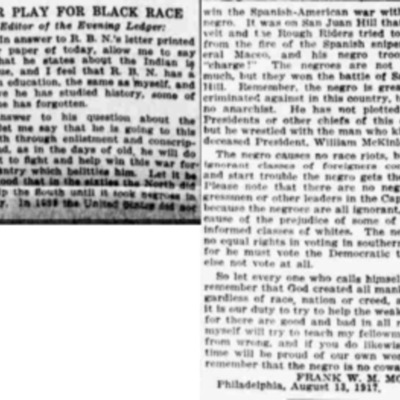