Negroes Plan Action to Halt Removal of Police of Their Race

Negroes Plan Action to Halt Removal of Police of Their Race

A meeting is to be held to discuss the suspected plans of the South Street Business Men's Association to remove African American's from the police force.

Mass-Meeting Scheduled for Tomorrow Night as Effort to Prevent Elimination From Force
-------------------------------------
CLASH WITH MERCHANTS
-------------------------------------
Negroes will hold an indignation meeting tomorrow night, when action will be taken in an attempt to prevent what Bishop l. J. Coppin described today as a "preliminary effort to eliminate negroes entirely from the police force of Philadelphia." The meeting will be held at the Allen A. M. E. Chruch, 17th and Bainbridge streets. G. Grant Williams will preside and Andrew F. Stevens will be secretary. The list of speakers has not been announced, but it was said that it would include the "city's representative colored men."
The South Street Business Men's Association is held responsible by the negroes for the removal of the policemen over whome the war is being fought with economic weapons. Harry Levy, its president today denied this, and offered to give $100 to any negro charity if the assertion could be proved. He also said that a boycott against the white merchants was being waged for political reasons, and that the better element of "colored people" is being blamed for a dondition which it had "no hand in making."
[cont.] 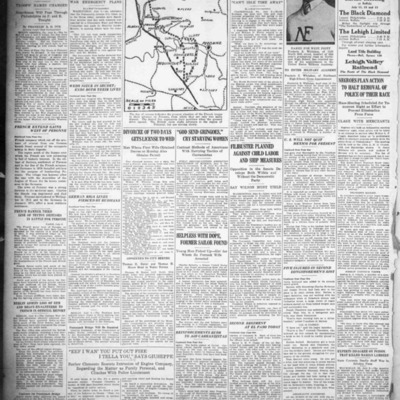 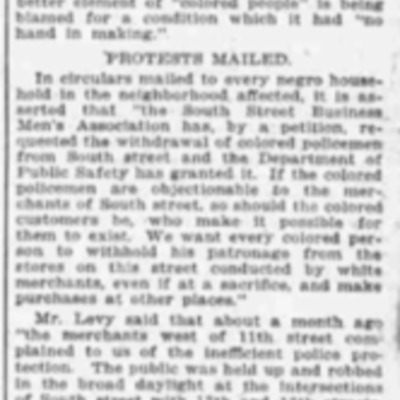