To Improve Conditions of Race Workers

To Improve Conditions of Race Workers

This article reports the International Ladies' Garment Workers' Union's efforts to unionize Black textile workers. According to Mrs. Emma Thompson's studies, non-union workers deal with unsanitary conditions and sometimes receive less than half the pay that union workers receive. The ILGWU hopes to unionize the non-union factories to improve these conditions and to give the women higher pay as well as more days off.

To Improve Conditions of Race Workers
_____

Garment Workers Union Wants Women to Enroll; Colored Worker to be Placed on Board


The International Ladies' Garment Workers' Union through Local No. 50 of this city is making a definite effort to improve the working conditions of colored workers. Working conditions in the shops of this industry have been deteriorating for some time, and although the costs of living are steadily advancing, there has been no increase in the wage scale.
Mrs. Emma Carter Thompson, who was formerly with the Armstrong Association, and who is thoroughly familiar with the working conditions of our women has been engaged by Local No. 50 to investigate the shops in which colored workers are employed, and to organize the colored workers in order to improve collectively their working conditions. Mrs. Thompson's investigations have shown that non-union, and particularly the colored workers are being exploited. Some of the shops are dirty and unsanitary. Lights in many places are unshaded. In other places, nearly all work must be done by electric lights, thus endangering the eyes of the workers. Prices for work are ridiculously low. Only the best and fastest workers can make as much as $18.00 per week. Most of our women are employed as pressers and when we compare the prices paid for pressing in the Union shops with the prices paid in the non-union shops, we can then see the difference of the exisiting conditions in these two types of shops. In some cases the prices average less than one-half compared with Union shops. 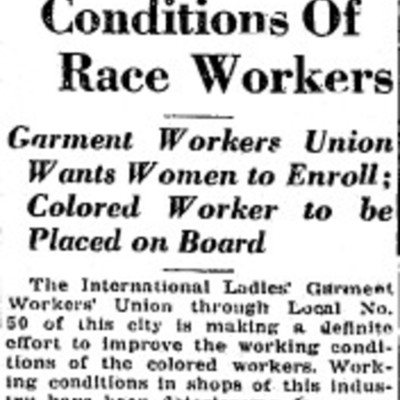 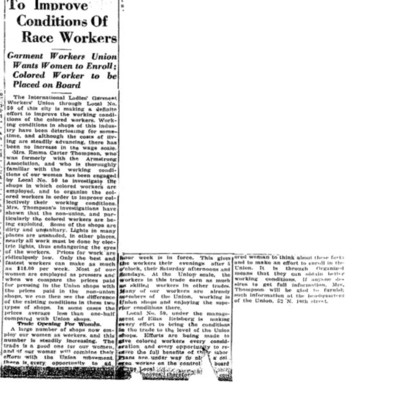 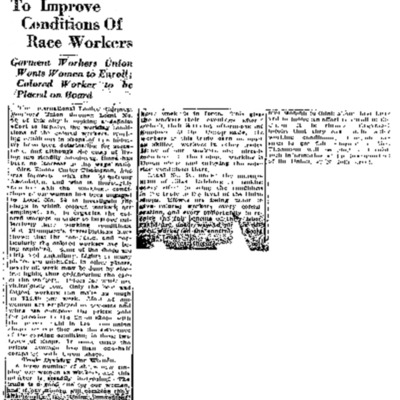 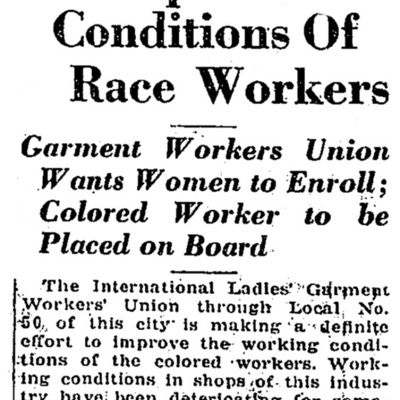