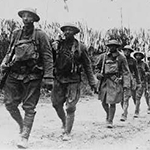 Listen to and explore the curated OHMS index for Arthur Dingle's interview, created by Suzanne Irvin in Fall 2014.

Arthur Clifford Dingle (1891-1989) was born in Manning, South Carolina to Edward Dingle and Susan Emma Dingle. One of nine children, he attended public school until the age of 17, when his father died. Dingle then left South Carolina in search of work to support his mother and siblings, beginning his migration towards the North. In 1918 he settled in Philadelphia, where he resided until his death in 1989.