Atkinson discusses the need for equality and recognition of the African Americans living within the city, appealing to the patriotism and work ethic his race has displayed.

[The following article was written by Wilmer Atkinson, representing the Armstrong Association, an organziation which has been doing notable work on behalf of the negroes of Philadelphia. Mr. Atkinson's interest in this work has been many years standing and he speaks with a knowledge born of long and patient study of the difficult problems involved. We are glad to present his appeal, which speaks for itself.--Editor.]
-------------------------------------

HUNDREDS of churches and Sunday schools today are developing a multitude of colored youths of both sexes who have caught a vision of a great constructive program of race building. They have conceived the idea that a forward and uplifiting movement for the negro race must be based upon a complete understanding between the races; that, situated as it is in the United States, its development must be related to a sympathy and helpfulness upon the part of the white people, in whose hands largely lies the control of the machinery which determines the destiny of races in thsi country.
They conceive that an exercise of a spirit of sympathy, helpfulness and fair play benefits not only those toward whom it is extended, but reacts in a fuller, larger sense upon those who exercise these qualities. Those great and pregnant[???] virtues have their origin in a kindness of heart, a sense of justice and an informed understanding.
Witihin the limits of Philadelphia it is estimated that their dwell mroe than 120,000 members of the negro race. In the fundamental problems of this large colored population are involved four essentials--industrial opportunities, housing, education and recreation. Along with the proof that the war has given of the splended physical bravery of the negro has been the honor won by him as a workingman in war industries. In the labor divisions of the army, in the stevedore[???] regiments of France, in the great industrial projects which met successfully the increased productions for the winning of the war, the skill and muscle of the American negro played a heroic part. We have had convincing proof of his ability as a workman at Hog Island, Eddystone, Baldwins, the Sun Shipbuilding Compnay, the General Electric Company, the sugar refining company, attesting his remarkable capacity. Not only as an unskilled laborer did he show his capability, but in shipbuilding at Newport News his services were successfully brought into play as a skilled workman in riveting and in steel construction. His marvelous mechanical ability in such work ahs been given quite full recognition by his employers.
[cont.] 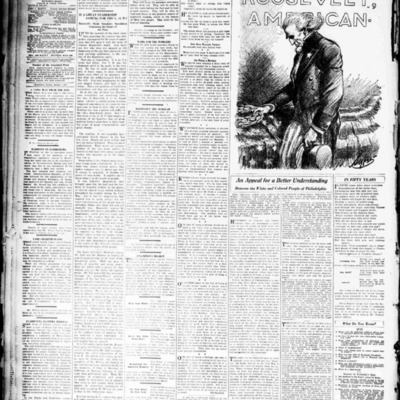 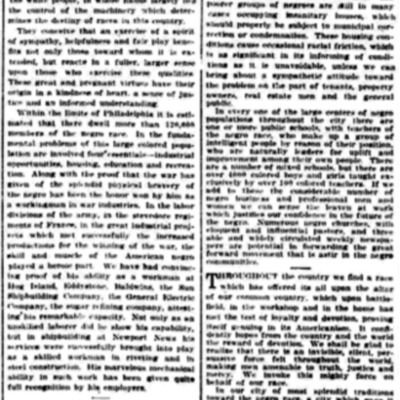